Philips even introduced their own Handheld console with the In2It? 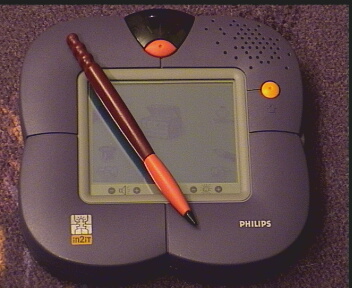 This was actually a really nice thing, like a prequel to the Nintendo DS. It had a stylus and a touchscreen, and some games for two players. According to some Net articles this unit was never released, but I guess it was only in the Netherlands then, because I've seen them in the shops by myself. They were introduced in 1996, so even when CD-i was already going down.

Someone else remember those units?
by tgn_rogue
Wow I havent even seen a picture of one of those let alone the real thing. And to be honest I would say it looks better than the DS

lol.
by Merijn
So what kind of games did they have for them then?
Never saw one of those around.. never even heard of these to be honest..
by Bas
Don't imagine a lot of the games, it was a bit like patience, solitaire, a small platform game like captain comic, a game like 'funnels' (where you had to solve brain puzzles), so nothing spectacular.

Aimed more at an educational area. I'm sure they were for sale here, but according to the Net the in2it remains unreleased...

OK, if i was really enthusiastic i would have bought one back then. It's nice to see this effort, but it surely felt in a black hole compared to all the other great consoles. It seems Philips always want to do a different approach with them (like with cd-i), but again, failed...
by greenday
The worst touch screen handheld has to the Game.com ! anybody got 1 ?
by Devin
Wasn't that the one that had a Resi Evil game?
by greenday
It sure did Res 2 i believe and for the life of me ive no idea how that was gonna work.
by Devin
Now I remember! Saw this at a Swap Meet in California, my buddy picked it up with a bunch of other stuff but the game.com didn't work. Probably something to do with it baking in the midday sun for hours, so we decided to rip it apart and try and sell it as a prototype! Nah just kidding

by greenday
I got 1 off ebay for a few quid a while back and how pissed off was i when it popped through the letter box. Utter Crap ! u would go blind playing that thing.
All times are UTC+01:00
Page 1 of 1
Powered by phpBB® Forum Software © phpBB Limited
https://www.phpbb.com/